Smoking regularly will shorten your life and increase your chances of contracting cancer. People who smoke have a far greater chance of dying of smoking related cancer. That’s why it’s never been a better time to quit smoking than today.

Not only that, but it’s never been easier to quit either.

The tobacco industry is very wealthy and very powerful, with friends in government around the world.

The Government, Politicians and Future Legislation

Cigarette smokers pay over £12 billion annually in duty in the UK, which makes it prohibitively expensive for the Government to stop them all from smoking.

The only other substance that is harmful to its users while also raising billions in tax revenue is alcohol. There is an increasing movement making lots of noise, voicing their concerns over the potential dangers of e-cigarettes and vaporizers.

Cigarettes kill over 100,000 people a year in the UK, but are not made illegal, meanwhile, the government has introduced tough health and safety workplace legislation to reduce workplace fatalities which stand at less than 200 per year.

£12.1 billion is a lot of money to lose from the public purse. Are we to assume that the Government doesn’t mind too much about 100,000 deaths annually because they are profitable deaths?

The Regulation of E-Cigarettes

The lost tax revenue from smokers switching to electronic cigarettes will force the exchequer to look at the regulation and taxation of e-liquid. It is likely that regulation will mean the demise of smaller manufacturers making and selling e-cigarettes. 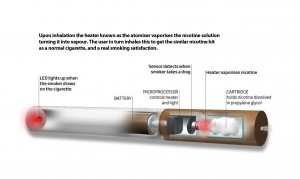 Will this be in the public interest, and for the protection of smokers? It is going to become necessary for the UK government to regulate e-cigarettes in order to tax their use and recover lost tobacco duty revenues.

Two industries will be affected by the growing popularity of e-cigarettes, the tobacco industry and the smoking cessation industry. Many smokers like the satisfying nicotine hit that they get from an e-cigarette in preference to using patches or gum.

Despite not wanting to lose customers to electronic cigarettes, tobacco manufacturers aren’t in a position to argue against them on health grounds. The smoking cessation industry has been the driving force behind the negative press given to e-cigarettes, possibly being supported in some quarters by sections of the tobacco industry.

It is easy to see why the government needs to protect it’s current levels of duty that it receives from tobacco and taxing a “healthier” product to the same level would no doubt limit its use, thus protecting the established sector industries.

Smokers in general are prepared to try cheaper cigarettes, regardless of their source and whether they are “legitimate” or not. It is probable that e-cigarettes will be regulated to one degree or another before the end of 2014.

For e-cigarettes to be viable for the government the e-liquid needs to be taxed, otherwise the exchequer will lose too much money.

In spite of e-cigarettes being a healthier alternative to smoking, if they can’t be taxed then it is more likely that they will be banned instead.

E-cigarettes and vaporisers look likely to be regulated by governments worldwide in the next few years especially if they continue to grow in popularity.

As tobacco duty receipts fall, the treasury will look to plug the gap with regulation and taxation of the electronic devices that have replaced them.

It is logical to conclude that in the near future the government will be forced by the growing popularity of electronic cigarette devices to regulate them so that they can be taxed.